Great Weather Here At the Beach.
Wine Tasting Info for March 3rd and 4th
http://www.sowal.com/story/inaugural-30a-wine-festival-at-alys-beach-march-3-4
Posted by yzarctoo@aol.com at 1:04 PM No comments:

This only applies to those who were not grandfather in on annual Beach Driving Permits.
For more info:

Sometmes a little complaining to the right ear can get things back on track...we are officially on the agenda for the Commissioner's Feb 28th Meeting...Thanks to Ms. Jones our District 5 Commissioner.
Government works very slow, the Planning Department failed to get us on the 28th agenda so now we have to wait until March 13th...frustrating...as all we need is a simple YES or NO.

Your Board has been working on a special improvement for  the neighborhood for over a year. Ever since the white fence was installed by Reginal Utilities to shield their pump and lift station on Defuniak we have had various members ask us to try and hide it.  At first we wanted to landscape around it...but there was no source of water located near it. A local artist offered to donate some art panels to us so that we could hang those along the fence. Perhaps you are familiar with Don Sawyer's art work?
We approached Regional Utilities with our "gallery" idea and they gave us their approval. Then we went to the County Planning and Development Services Dept. to seek their approval, they agreed to work with us and take our idea to the County Commissioners.  We are hoping to be on their Feb 28th agenda. It appears that we will get approval for this project as the  Planning  and Development Dept gave me permission to go ahead and post our plan on our blog to share with our members.


So hopefully by early March we will go from this: 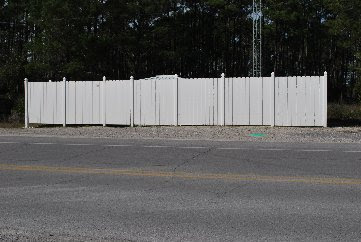 photoshop image
Posted by yzarctoo@aol.com at 6:29 PM No comments: 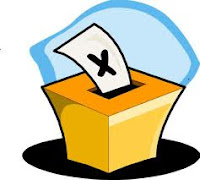 This year we have three board members coming off the GBNA Board. They are Billy Buzzett, Larry Jackson and Ann Morrell. Billy has decided to run again and he will be joined by Kitty Taylor and Jean Covell Silva.  They will join Grant Blackwell, Scott Provow, Andy Gray and Bill Wallace as your GBNA Board. In your membership packet that will be mailed out early next week you will find your ballot and information about each of the candidates.
Posted by yzarctoo@aol.com at 1:14 AM No comments:

Lots of debate and many discussions as to how to fund the 331 bridge.  Seems to me that that all of 331 needs to be widen first then the bridge. There have been several accidents just before crossing the bridge as the lanes merge...and if only the bridge gets wider, then there will be  more merging problems on the other side. The whole purpose of the plan is to make a more improved escape route on 331 in case of a hurricane...merging traffic on both sides of the widen bridge...seems a traffic jam in the making. Just a personal observation.You can read more in the following link.

A Beach Winter Get Away

Think about it, a Winter Get Away at the Beach. ....sound Good?

reprint from The Walton Sun


‘Not in a fighting mood': Geotube compromise emerges 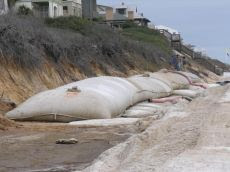 The Retreat conceded to deliver sand to its geotubes via conveyor belt, rather than trucking sand across the beach with heavy machinery. Representatives held a meeting Jan. 30 with Gulf Trace homeowners and other community members to discuss a compromise to the contentious project.
“We want to be good neighbors,” said Ed Erbesfield, a homeowner at The Retreat. “We’re willing to give in if y’all are willing to give in.”
The Retreat has been trucking in sand westward along the beach from the western Grayton Beach access, past Gulf Trace, which is surrounded on each side by state park land, to The Retreat beaches. The sand will be used to fill these large erosion-prevention devices.
According to Walton County Administrator Greg Kisela, the project requires 14,000 cubic yards of sand to be moved across the beach to the site at The Retreat. Of that, 5,000 cubic yards has already been moved.
“We have done what we felt is the right thing to do,” said Dave Lovell, who sits on The Retreat’s board of directors. But “what we’re doing out there is causing a stir.”
The sand-trucking was seen as the most cost- and time-efficient method of transporting sand to the geotubes, ensuring the project is finished as quickly as possible, not only for spring break tourism, but also because the start of turtle season is May 1.
In response to the ongoing project, however, the community outcry has been substantial.
“It is a living ecosystem,” said Anita Page, with the South Walton Community Council. “Driving on the beach should be a last resort.”
The Retreat has been working to get permitting to put in geotubes since Hurricane Dennis hit the Gulf Coast in 2005.
“For the last five or six years … they’ve been trying to put in protection,” said Kisela. “Our beaches are very special to us. To see any destruction to them is very frustrating.”
But representatives quickly signaled their intention to compromise.
“We’re not in a fighting mood. We’d rather have the goodwill of our neighbors,” said Erbesfield.
Though the work was advertised in the paper for 30 days, as is required by law, no one seemed prepared when the trucks started running the sand up and down the beach.
The Retreat proposed running two trucks per day in order to finish the project before March 1, but those gathered seemed to prefer an alternate method.
“If sand can be conveyed, that’s what should happen,” said Richard Fowlkes with the Blue Mountain Beach Community Association.
“The only way to resolve the dispute is a compromise,” responded Erbesfield. “We followed the rules. We honestly thought we were doing the right thing.”
He asked for homeowner consent to speed-up the project using the same mode of sand delivery.
“If we put it behind us in a 28-day time frame, rather than 90 days, we’d all sleep better at night,” said Erbesfield.
But that method did not garner any support from the crowd of critics.
“You have another way to do it,” said Fowlkes of the conveyor belt. “I just feel like we haven’t been considered.”
Ultimately, The Retreat representatives gave in after Kisela said “I don’t know what you guys are hearing. But what I’m hearing is you’ve got to convey.”
According to contractor Branch McClendon, with Redfish Marine Construction, it would take three to five days to have a conveyor system up and running. The last of the sand was moved from the Grayton Beach staging area Tuesday, but Redfish Construction is still using the access to get their work trucks to the beach.
“I think that went about as well as it was going to go,” said McClendon after the meeting.
Asked for his reflection, Fowlkes said, “Nothing’s perfect. I’m pleased that they’re being respectful.”
“We’re just folks like you are. Just everyday folks who want to live in paradise,” said Erbesfield.
Posted by yzarctoo@aol.com at 10:56 PM No comments: