Larry Jackson, President, called the GBNA Annual Meeting to order at 10 AM. He welcomed the membership to the annual meeting and introduced the three board members present, Ann Morrell, Grant Blackwell and Shirley Shalie, He explained that the three members missing, Leslie Provow, Linda Eyer, and Jean Shiva had prior commitments and couldn't be present for the morning meeting.

Scott Provow gave the invocation and then the Pledge of Allegiance was led by Larry Jackson.

Larry then asked the 33 attending memberships to stand and introduce themselves and tell where their home or lot was located.

Larry then explained for the new members that GBNA is an Association not a Homeowner's Association; we are an information service group and not a neighborhood compliance group. As a group we can't represent the Association in any political or governmental committee’s activities unless we have a majority vote by the membership to do so as listed in our bylaws. Our purpose is not to regulate our community only to keep it informed. In order to do that we have tried to have a representative at all Commissioner meetings that have an agenda that might affect Grayton Beach, we have also posted web links on the blog for news articles that are of interest to the Grayton Beach area for our out of town owners. He gave an example of the recent Blue Sign Controversy. The Board also sends out newsletters to update the membership throughout the year. The Board had provided a 2007 Priorities Update for those attending on the back of the Agenda that was passed out, this update had also been provided to the full membership via a newsletter earlier. Larry then briefly touched on many of the items covered in the report.

Grayton Beach Neighborhood Association 2007 Update
The board identified five main Goals of Concern for the year 2007- 2008. In regards to these concerns the board accomplished the following:

IMPROVE SAFETY AND OVER ALL ROAD CONDITIONS
* Contact was made with County Road Dept for shoulder maintenance multiple places along Defuniak Street and street repair on Pine Street.
* A drain cover for the corner of Pine and Grayton Oaks was installed
* A safety barricade installed at Grayton Oaks and Pine Street
* A Neighborhood Watch Program with Street Captains established for the Grayton Beach Neighborhood.
* Met with the County Road Sign department and pointed out signs that needed replacing or additional signs needed for our area.

MONITOR BEACH ACCESSESS
* Met with TDC to have hurricane debris removed from the Defuniak Street beach entry point. The area is now free of debris and both safe for driving and walking.
* The board has monitored the Pine Street State Park Beach Access and is in talks with the Park to replace the old and frayed roping.
* The board has talked with Commissioner Meadows about developing a better and safer parking situation for beach goers on the Garfield Street access.
*The Board is working on establishing a park bench at the Lydia-Banfill Lake Access.

PROMOTE A SENSE OF “NEIGHBORHOOD” – THE GRAYTON COMMUNITY
* The board sponsored two street party/dances for the Grayton Community.
* The board holds a General Informational Meeting once a year to elect new officers and to inform the membership of what has been accomplished throughout the year.
* Our 4th of July Parade continues to be an annual summer event for the community.

MAINTAIN COMMUNICATIONS WITH MEMBERS, COMMUNITY & GOVERNMENT LEADERS
* The board has met with Cindy Meadows and discussed our concerns in regards to our Grayton Beach Neighborhood. Bike and pedestrian safety along Defuniak Street, crowded parking issues in relation to the Grayton Public Beach, and the county overall plan for the Walton County Beaches was discussed.
* Board Members have attended various county meetings to keep the membership abreast of changes or future issues that might affect our community.
* The board maintains both a web site and a GBNA blog where members can find copies of minutes, reports of meetings with county officials, and other important information concerning our community.
* The board has had a member at all of the recent BCC meetings.

IMPROVE AND MAINTAIN APPEARANCE OF COMMON AREAS
* Continued Defuniak-Magnolia corner “Welcome to Grayton Beach” entry triangle landscaping maintenance with seasonal plantings and a water system installed
* Cleaning up trash and weeds form the West side of Defuniak Street at the entrance to Grayton Beach.
* Working with county to repair and seed damaged shoulders because of the Regional Utilities Pump Station construction.
* Board worked to have dumped debris and an abandon car removed from our area.

BUDGET
Larry then presented the group with the GBNA Proposed 2008 Draft Budget for the upcoming 2008 year. He went over the budget and then asked that the Proposed Budget be voted on. A motion was made and the Budget was approved.


The responses from the GBNA Survey and the areas that the membership had ranked as their concerns for the coming year were discussed next.

BCC Beach Committee Participation by the Board? YES 93 NO 6

There were several questions from the floor that the Board responded to.

Driving on the Beach
As of right now, Grayton Beach changes are not in the works. We currently have 83 beach parking spots with one handicap parking spot .Grayton Beach is considered a Neighborhood Beach. A Regional Beach is one with bathrooms. The only beach that allows driving on the beach is Grayton. The Inlet Beach no longer allows driving on the beach. The County Commission will be addressing other local beach issues before addressing Grayton Beach and the driving on beach issue. Grant Blackwell, stated that he was interested in serving on a beach committee if the county formed one and would be willing to present personal opinions from our members. The membership will be kept informed by the Board on future beach Issues via the blog and newsletters.

White Sand on Defuniak Street Shoulder
The Board had pushed to have the area on the west shoulder of Defuniak street sodded. Dirt had been brought in and grass seeding had taken place by the county, but the seeding had violated a county code so the dirt was removed and white sand was put in its place.

Resurfacing of Roads within Grayton
A patch resurfacing was done at the entrance of Pine Street by the County Roads Department, and several pot holes had been reported to the county as needing repair. At this time due to limited funding and equipment, road repairs are being done fairly slowly. Grant Blackwell offered to be the “go between” for any road repair in Grayton. Grant also said that the County was waiting for some gravel so that some of the shoulder areas ruts could be filled in to avoid any biking accidents.

Beach Access Clean Up on Defuniak Street
TDC has done some clean up of the Defuniak Street beach entry over the last year. The debris from the county Ivan cleans up had left many chunks of wood sticking out of the sand making it dangerous to drive over or walk on. As the sand shifts and is driven on, more and more debris has moved to the surface. Grant has kept after the TDC to continue shifting the sand to remove the debris. He was told by the TDC that a large sand shifter that would remove all the debris at once would cost the county $2000 to rent.

Regional Utility by Lift Station
Some of the membership wondered about the landscaping that had been previously discussed at a previous annual meeting that would be planted around the white fence that surrounds the lift station on Defuniak Street. Any planting that is done must be approved by the county as that area has to be available for easy repair. Grant Blackwell agreed to check with the Utility Department as to what could be done to make the area more attractive.

Cars Speeding on Defuniak Street/ Bumps/ 20MPH
There were some concerns from the members about the speeding that has continued on Defuniak Street. Larry expressed that the Board had concerns also and had even had the traffic posting unit put at the entrance to Grayton for a couple of weeks. It was suggested that perhaps the Board see if our traffic tables (speed bumps) couldn’t be reworked so as to slow traffic down. Grant agreed to check into that with the county.

D&K Dumpster on Alley Property…code Enforcement
Pat Murphy said that she had been concerned about the dumpster behind D&K that was blocking the alley way, so she had asked that the county code enforcement look into the matter. They did, and D&K removed the dumpster from the area. Problem solved.

Landscape Report
Larry gave a report on the status and changes made in the Landscaping of the Triangle and the entry into Grayton on the west side of Defuniak Street.

Agenda Items from the Audience

Richard Veldman asked the Association to help him get three day garbage pick up in Grayton from Memorial Day through Labor Day. The two day garbage pick up is just not enough during this busy vacation time. Many times he has had to have his staff at Rivard remove garbage due to the many rentals and all the garbage that is produced. The Board agreed to see if contacting the Public Works as an Association might achieve this.

Parking in front of Houses

Voting Results
Posted by yzarctoo@aol.com at 5:36 PM No comments: 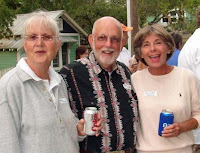 Bring your special recipe side dish to the GBNA Evening Potluck and Dance, April 19th 5:30-8:30 PM, at Shirley’s house, 490 Defuniak Street. Talk with your neighbors and listen to the music by the band, Timeless. 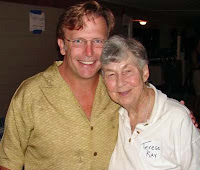 Posted by yzarctoo@aol.com at 12:51 PM No comments: