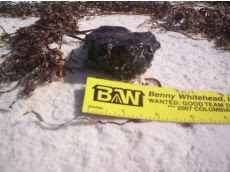 More oil expected as storms continue
WALTON COUNTY — Less than two days after removing oil warning notifications in Walton County, officials are working on cleanup for tar balls and tar patties that washed ashore over the weekend.
Miles of Topsail Hill Preserve to Seaside Beach were covered in the remnants of April’s Deepwater Horizon oil spill. Reports of tar patties as large as seven inches were discovered Sunday along with tar-covered wood and plastic debris.
“As long as the weather continues to bring in storm surges we’ll see more oil,” said Cortnee Ferguson, spokeswoman for Deepwater Horizon Joint Information Center. “This is a good thing. The more oil that washes ashore the more we can clean up and dispose of it properly.”
Crews were dispatched to beaches Monday morning to finish clean up halted Sunday because of weather.
Lt. Joe Preston with the Walton County Sheriff’s Department said the concentrated areas for clean up will be Topsail Hill Preserve and Grayton Beach.
Officials announced Friday that because no significant oil presence had been seen since July 3, the signs on oil safety and oil warnings would be removed from the beaches. Preston said Walton County officials will be meeting to see if the move was too soon and to discuss if the signs will be placed back on the beaches.
For now, he said they are watching where storms surges will be heading.
“We’re meeting soon to discuss the appropriate response to this,” Preston said. “We’re keeping an eye on the weather and that will dictate our response. Now, it’s too early to tell."

Posted by yzarctoo@aol.com at 3:51 PM