Larry Jackson called the meeting to order. The minutes of the February 8th meeting were approved.

There was no treasurer’s report due to the absence of Shirley Sahlie. Ann Morrell and Leslie Provow will be added to the bank signature card to provide backup.

Larry Jackson explained the telephone conferencing program from 1 Source International that the Board had enrolled in, allowing our board members to call in and attend meetings via phone. This will be very useful for our out-of-town board members. The service provides toll free call-in at a 5 cents per minute per line.

Leslie confirmed that Billy Buzzett will be speaking to the group on April 19th for about 15 minutes. Eddie Robinson Band will be contacted to see if they can play on the 19th, if not Timeless will be contacted. Grant agreed to see if the street party could be held at the Red Bar, if not if will be held at the usual place. Permits will be needed to close off the street. A port-a-potty will need to be rented. There was some discussion if we needed to rent two tents in case of rain. Leslie agreed to shop around and check out tent rental fees in case the board opted for tents. Fried chicken would be ordered by Leslie. There will be another meeting before the April 19th date to firm up other party details both for morning meeting and street dance later in evening. ( Note, subsequently the board accepted Shirley Sahlie’s offer to hold the street party will held at her house, 490 Defuniak Street. The band Timeless will provide music.) Kelly Buzzett, a guest, spoke to the Board about the TDC signs and about the importance of our attendance at the March 26th meeting. She asked that we notify our membership about the sign concerns. It was agreed by the board to mention this item of concern to our membership in our upcoming membership letter and to also place a newspaper reference and picture on our blog.
Neighborhood Watch Update

Grant reported that applications were still coming in. That there had been over 50 applications returned so far. That two neighborhood signs had been posted already as you entered the neighborhood. All neighborhood captains had been established and that he had received a lot of positive feedback from Grayton residents enrolling in the program. There was a discussion as to how many more signs should be ordered to place around the neighborhood, it was agreed that the Board would purchase 6 more signs. It was agreed that Ann would post the Neighborhood Watch Application along with a picture of the Neighborhood Watch Sign on the blog so that residents could down load the application if they needed too.

Federal and State Corporation Filings
Larry and Jean are responsible for determining need to file for Federal tax-exempt status as an IRS Section 501 (c) 4 Social Organization. Ann and Shirley will be responsible for filing the Florida 2008 Non-profit Corporation Annual Report by May 1st.
Key Documents

Ann reported that she had been given a CD by Scott Provow that contained many documents (previous minutes and membership lists) that he had recovered from his computer. She asked that board members still be on the look out for any old records and if found pass them on to her. Larry also asked that Ann correct the GBNA Bylaws on the blog and to correct the year to 2004

Budget 2008
Larry asked the Board to look over the 2008 Budget Draft and make any additions or corrections that might be needed. 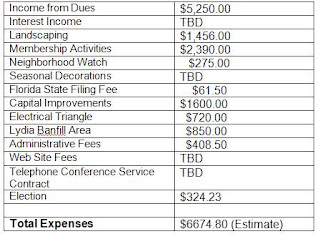 Spring Annual Meeting will be held at Point Washington Church on April 19th. A spring email notice will be sent to members with email addresses. Election Ballot of Candidates will be mailed out by the week of March 25th.

Different names were suggested and individual board members were assigned to contact them and ask if they were willing to run. The board will need to consider an exception for Linda Eyer to continue her board position for the second year. The Eyers no longer own property in Grayton Beach. There are three 2-year positions – Shirley Sahlie, Leslie Provow and Larry Jackson – to be filled this election. Linda Eyer’s position is subject to an affirmation vote by members.

Grant reported that Brian Hand, the original artist of the sign, agreed to refinish it and then reinstall it. Leah Webster, Blue Mountain Lawn and Plant Care, will be planting spring flowers during the month.

Leslie agreed to send flowers to Shirley at the hospital in Montgomery from the GBNA. The meeting was then adjourned.