Grant expressed the Board and Membership’s appreciation to Shirley for her continued support of the Association and for her gracious hosting of the annual meeting.
Following the invocation and Pledge of Allegiance, Grant introduced the 2011-2012 Board Members and the new 2012-2013 Board as follows:

The new Board will confirm officers at their next meeting.
Minutes:  March 9th minutes were approved by board member E-mails and posted to GBNA Blog.

Membership:  Dues were received for 180 memberships.
Guests:
County Commissioner Jones.  Cecilia Jones invited property owners to contact her or her assistant, Jason, any time for help at her Grayton Beach office, 70 Logan Lane, 850-231-2978.
County Sheriff Mike Adkinson.  Sheriff Adkinson addressed the issues of parking, noise complaints and crowd control during peak periods.  The Sheriff’s Office receives over 1000 calls for service a week.  He noted that the County Administrator was the only official who could declare no parking zones.  Sheriff Adkinson said that the Sheriff’s office is reviewing the new Parking Ordinance.
Don Sawyer Art Project.  Ann Morrell introduced Don Sawyer.  Everyone thanked him for the contribution of his paintings displayed on the DeFuniak Street Lift Station.
Real Estate Update:  Scott Provow gave attendees the profile of recent home prices and sales in the 30A area and in Grayton Beach.  Sales are up 160% this year..   Sellers have seen bids generally below their asking price with sale prices 60% below the 2005 prices.  Over the last few years, Grayton Beach had an average of 18 homes for sale.  This year there are only 7 homes for sale.
Grayton Beach State Park:  Assistant State Park Manager Mathew Allen and District Biologist Tova Stector gave a presentation on management activities at the State Park.  The park consists of 200 acres of state park around Grayton Beach.  The presentation covered native plants common to the Park.  He discussed concerns for invasive plants in the neighboring communities that could affect the park.  A native plant guide, Friendly Plantings for Grayton Beach Area, was passed out to attendees.  It has been posted on the Grayton Beach Association BLOG at http://minutesonly.blogspot.com/2012/04/friendly-plantings-for-grayton-beach.html .  One member asked about the control of Phragmites reeds spreading around Western Lake, including the Banfill-Lydia Lake Access.  Mathew said they sought to control it and had access to an herbicide that was only approved for use by official agencies.  This herbicide might be something the TDC could use to control reeds at our lake access areas.  Another member asked about planting native lupine.  The presenters noted only nursery they knew that was successful growing lupine was the 10 Mile Creek Nursery in Hartford, AL.  The marking of bird nesting areas was also discussed.
Past Year:  Grant covered association activities during the last year including the membership directory, DeFuniak Street shoulder improvements, the Sawyer Art project on the DeFuniak Street Lift Station and Hotz Avenue Beautification Project. Member Directory:  Attendees received a 2012 membership directory replacing the 2006 Membership Directory. 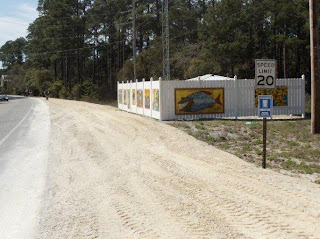 Shoulder Work:  The County added aggregate to the west shoulder on both sides of the DeFuniak.

Hotz Avenue Beautification Project:  Grant covered the work completed on the project and the efforts to meet County approval.  This project was one of the capital improvement projects.  As the project neared completion, the board reviewed and approved a special request for funding.  Project Budget Target of $5,000 was approved at the September 23, 2011 Board Meeting. The Board, following the March 9, 2012 meeting, received an April 2nd request from Grant and Billy for an additional $3,300 to complete the major work on Hotz Avenue Beautification project by April 7, 2012.  Scott Provow made an April 2 motion to approve the additional $3,300 for the Hotz Avenue project to be included in the 2011-2012 financial statement for a total of $8,300. Grant, Billy, Scott, Andy, Bill and Larry voted yes, Ann Abstained.  The final cost was $8292 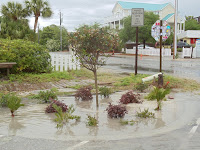 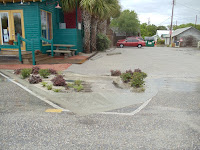 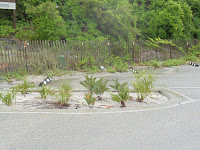 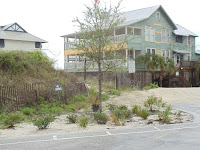 Background.  GBNA received County Commission approval for the project on March 13. GBNA’s request to the Commission sought to complete the project by April 7. Thomas Stein, a county-approved contractor, was hired to cut and remove pavements, install required Ribbon Curbs and fill with soil accordance with County specifications. GBNA paid Thomas Stein for his $6,423.18 invoice for the Ribbon Curb, removing the old pavement, and replacing the soil to the county specifications. The cost of the plants and labor to plant and do ground preparation was $1,886.68
January Sand Dump:  Grant covered the January Retreat Resorts Beach Restoration project that used the DeFuniak Street Beach Access to move large quantities of sand by truck over the beach from Grayton Beach past Gulf Trace to Blue Mountain.  The GBNA Blog has a detailed Walton Sun article at http://graytonbeachflorida.blogspot.com/2012/01/county-does-it-again-to-grayton.html
Member Comments/Questions:
Traffic and Safety:  Several attendees discussed effectiveness of the speed radar indicator on DeFuniak Street.  Other speed moderation approaches were covered including small traffic islands, flower planters and additional radar signs.  The Board is going to review need to push for re-installing speed bumps on DeFuniak and other streets.
Street Lighting:  Grant advised attendees that CHELCO was going to require utilities payments for street lights currently running in old Grayton.  Residents there should contact CHELCO if they want to pay a monthly fee for the light in their area.
Rental Signs Initliative:
The annual meeting and the Board have has discussions over visual impact of signs over the last few years. u.e. the Davis IS Grayton for sale? Presentation at our 2008 Annual meeting. One companion cited was the restriction sign requirements for Gulf Trace property owners. 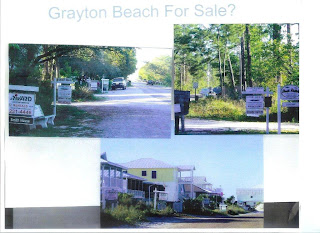 Richard Veldman, Rivard Realty, reported that his company has been changing out the hanging rental signs for property signs attached to the home. He recommended that Grayton property owners all start doing this. 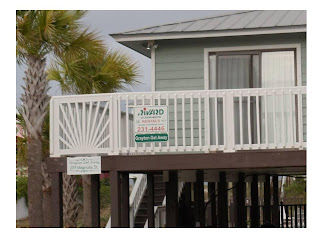 Noise:  Billy and Grant have had discussions with Sheriff Adkinson about noise.  The current criteria is “Breech of the Peace”.  The Sheriff comment was they will respond to call and make a determination in accordance with current ordinance.
Adopt a Tree:  Grant discussed a proposed volunteer project to plant more trees as a part of a neighborhood beautification project.
The meeting was adjourned at 11:30 AM.
Member Communications:  Members were reminded of the two digital communications systems available - the Grayton Beach Neighborhood Association Blog at http://graytonbeachflorida.blogspot.com/  and the Facebook site at http://www.facebook.com/GraytonBeachNeighborhoodAssociation .
Submitted by Larry Jackson, Secretary Upon approval, these minutes are posted on Grayton Beach Neighborhood Association BLOG at http://graytonbeachflorida.blogspot.com/ ,
The Minutes are cataloged at http://minutesonly.blogspot.com/

Posted by yzarctoo@aol.com at 8:51 AM